Slavery by Another Name: The Re-enslavement of Black Americans from the Civil War to World War II by Douglas A Blackmon - review by Josh Glancy

On 30 March 1908, Green Cottenham went down to the railway station in Columbiana, Alabama, as normal. It was there that he would pick up casual labour transporting crates or picking cotton. In between shifts he whiled away his day playing dice and smoking tobacco with his fellow African-Americans. This day, however, turned out differently. Cottenham was seized by the local sheriff’s chief deputy and accused of riding a freight train without a ticket. He appeared before a judge the following day. There was no evidence to convict him, so the judge declared him guilty of ‘vagrancy’ instead, a crime so vague that there was no defence. 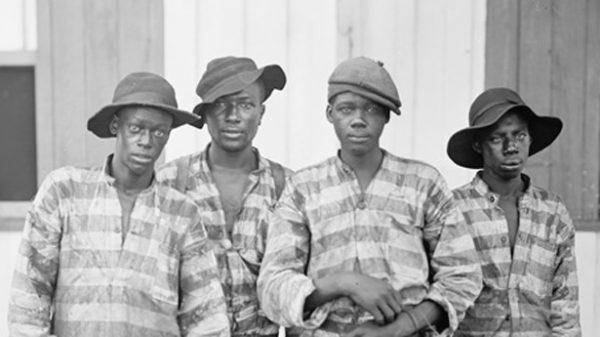 “The leasing of prisoners to corporate interests by the state was a well-established activity in 19th-century America.”

The purpose of this legal charade was not to lock Cottenham up in prison. Instead he was sentenced to work for the Tennessee Coal, Iron and Railroad Company for three months of hard labour, plus an extra three months and six days’ work to pay off the costs of his arrest and sentencing. For this the company, a subsidiary of the giant US Steel, paid the county the considerable sum of $12 a month.

Life in Pratts coal mine was a desperate affair. Each day was spent in chains, working underground ‘in a vast labyrinth of black rock tunnels, shared only by dozens of dirty mules and squadrons of desperate men’. Sodomy was rife, as was violence between the convicts, and vicious punishments were regularly meted out by the overseers. Cottenham entered this environment a strong, fit young man. Within five months, he had contracted tuberculosis and died.

The harrowing demise of Green Cottenham is a tale that becomes all too familiar in Douglas A Blackmon’s Pulitzer Prize-winning book. A white Southerner by birth, Blackmon, previously the Wall Street Journal’s bureau chief in Atlanta, has delved deep into the archives to paint a detailed and powerful picture of neo-slavery in the American South between the end of the Civil War in 1865 and the Second World War.

The leasing of prisoners to corporate interests by the state was a well-established activity in 19th-century America. But in the aftermath of the Civil War, it developed into a widely practised and often extra-legal means of providing free black labour to a rapidly industrialising Southern economy.

The war had ended the specific institution of slavery, but there was no strategy for cleansing the South of its ‘economic and intellectual addiction to slavery’. Rather than face up to the task of creating an equal society, the most racist elements of Southern society went about turning the region into what W E B Du Bois called an ‘armed camp for intimidating black folk’. Elements of this armed camp included the Ku Klux Klan, lynchings and the Jim Crow laws. Through his diligent investigation into forced labour, Blackmon has unearthed and examined another important strand of post-Civil War Southern white hegemony.

Under the convict-leasing system, African-Americans would be accused of any number of petty and often unprovable crimes, such as speaking loudly in the presence of a white woman or selling cotton after sunset. Their convictions were hurried through the local magistrate and their labour sold to local industrialists, thus ‘knitting together the interests of capitalists, white farmers, local sheriffs and judges’.

Such was the labyrinthine and often unofficial nature of this system that it is difficult for Blackmon to produce exact statistics. But by 1877, the end of the Reconstruction period after the Civil War, ‘every former Confederate state apart from Virginia had adopted the practice of leasing black prisoners into commercial hands’. He estimates that by the end of the 1880s at least ten thousand black men in the South were slaving in forced labour.

The numbers do not compare to the four million who were kept in slavery during the antebellum period. But the system was an important means of ‘terrorizing the larger black population into compliance with a social order in which they willingly submitted to complete domination by whites’.

There were attempts to temper the most brazenly illegal excesses of this system. In 1903, Alabama’s federal prosecutor, Warren Reese, even secured some unlikely convictions. Yet within months, the perpetrators had been pardoned. The use of forced labour continued well into the 20th century, until eventually a combination of changing social attitudes and increasing impracticality caused it to peter out.

The period covered by Blackmon’s book saw post-Civil War America grow from a divided nation into a global superpower. In the South, a large and prosperous middle class emerged. But for thousands of African-Americans, deprived of access to the vote and a fair justice system, and forced to work without wages or freedom, this was still an age of slavery.

Douglas Blackmon’s long catalogue of suffering does not make easy reading, and would be improved by removing the occasional rhetorical flourishes in which he imagines the fate of the convict labourer a little too creatively. Nonetheless, it is an extremely valuable piece of history, and Blackmon sums up its importance for contemporary America effectively in his conclusion, stating that

only by acknowledging the full extent of slavery’s grip on American society – its intimate connection to present-day wealth and power, the depth of its injury to millions of black Americans, the shocking nearness of its true end – can we reconcile the paradoxes of current American life.

For People Who Devour Books

Only a selection of our reviews and articles are free. Subscribers receive the monthly magazine and access to all articles on our website.